It almost seems too simple: a skein of wool saving a life.  For women of Nepal, beaten down by a complex and consuming social status, wool is a welcome reality. 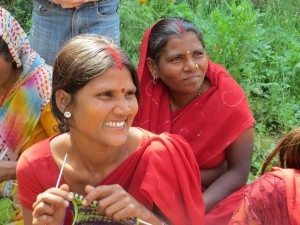 Hasroon is one of these women.  Hasroon was married at 18 and living a happy life with her infant son and husband . . . until her in-laws began demanding dowry money.  When Hasroon’s family couldn’t pay, she was beaten, humiliated, and ultimately covered with gasoline, pushed into the bathroom, and set on fire. Today, Hasroon works for Padhma Creations, a social enterprise founded by Kesang Yudron.   Padhma is the Sanskrit word for lotus, the flower that emerges pure and white from the muddy swamp.  Kesang believes it is a fitting symbol for the women artisans, like Hasroom, who work at Padhma Creations.  Padhma Creations gives Hasroon the training and job she needs to provide a secure and supportive life for her and her son.

Padhma Creations partners with women from neighboring villages of Nepalgunj, Bardiya, and Surkhet in Nepal.  Wool is divided among their families who then make berets, scarves, socks, and other items in their homes or in shelters for women without homes. These woolens are then sold, and the money reinvested in programs to support the artisans and their children.  Kesang thought of the idea in 2000 when she and her father visited Nepalgunj, a border town between Nepal and India.

“I remember being shocked at the sight of a 13-year-old village girl being rescued from trafficking by the police,” Kesang said. “The story was that a distant relative of hers had intentions of selling her to a brothel in Mumbai. This incident created a lasting and profound impression on my life.”

Thousands of young Nepali women are trafficked to India every year for prostitution, child labor, and slavery, Kesang said.
Others are victims of domestic abuse.  All have no jobs or paying skills. “Padhma Creations not only helps these women but saves their families from a life of spiraling poverty. [In addition,] we want to raise awareness about the lives of people in other countries,” Kesang said. “Our hope is to influence a new generation of empathetic young adults  who will be socially conscious consumers.”

We have been working with Ganesh Himal Trading since 2005.  They not only offer wonderful Fair Trade items to us, but they do well for their workers - everything from building a clinic in Nepal to starting a foundation to support women and girls and the development fund.  Everything they do is in support of the greater good.  The build long term relationships and make peoples lives and traditions a priority.  You can find these lovely Fair Trade Hand Knit Christmas Stockings Here.

In addition to providing above market wages for the women, Padhma aims to provide women artisans with health, education and social welfare programs.  And so, since 2011, Ganesh Himal Trading has contributed $1.00 for every item made by the group to a Worker Development Fund.  A Worker’s Development Fund is a social benefit package which compliments already existing fair wages and steady employment. The money that is set aside gives women in the group the chance to decide how that money can be used to create additional financial support for the artisan group as a whole. Since 2011 the women have chosen to use a portion of the funds to provide scholarships for their children.  Originally, these scholarships were prioritized for the women most in need, but as the fund grew the number of recipients grew and now, all of the children of Padhma knitters are on scholarship (49 children as of 2015).  In 2015 alone, Ganesh Himal contributed $6,345.  Additional funds have been used for medical expenses, funeral costs and family emergencies.